Thirteen-year-old Julie Whitaker was kidnapped from her bedroom in the middle of the night, witnessed only by her younger sister. Her family was shattered, but managed to stick together, hoping against hope that Julie is still alive. And then one night: the doorbell rings. A young woman who appears to be Julie is finally, miraculously, home safe. The family is ecstatic—but Anna, Julie’s mother, has whispers of doubts.  She hates to face them. She cannot avoid them. When she is contacted by a former detective turned private eye, she begins a torturous search for the truth about the woman she desperately hopes is her daughter. 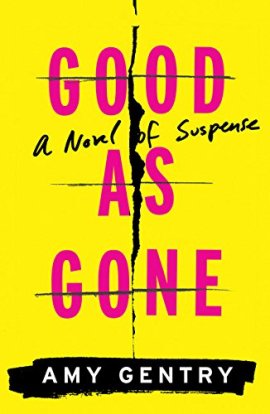 Good As Gone showed up under “New and Notable” in my Kindle Prime Reading, and I downloaded it since I occasionally branch out into other genres to mix things up. I don’t normally read suspense thrillers, but I enjoyed this one all the way through, despite a few flaws.

The story is well written, and moves between the protagonist, Anna Whitaker, and a few other characters. This is broken up between chapters, so it doesn’t get confusing, although toward the end of the story there is a lot of jumping around and “perspective shifts” which I won’t go into more detail on since it borders on spoilers. Suffice to say, I had to re-read a few pages to make sure I knew what was going on.

Gentry’s writing is solid, and she crafts a dark, believable tale that should satisfy fans of the genre and anyone looking for a gritty suspense story. It’s a quick read with very little filler, and only lagged briefly in a few spots. It was also refreshing that this appears to be a standalone novel, since so many thrillers are huge series.

If you’re interested in Good As Gone you can buy it using the affiliate link below, which helps to support my blog.

Good as Gone: A Novel of Suspense