THE CLASSIC SCIENCE FICTION TALE THAT WILL EAT YOUR BRAINS!

Never before in the history of warfare had destruction been so indiscriminate and so universal.

Panic descends upon planet Earth once more as H. G. Wells’s terrify- ing cosmic invaders blaze a path of fiery destruction across Victorian England, leaving thousands of undead in their wake. Our adventurous narrator must survive the apocalyptic alien threat while fighting off rag- ing, bloodthirsty zombies. Who will triumph when man, Martian, and flesh-eating monster meet? Packed with fearsome supernatural creatures at every turn, Wells’s original masterpiece is scarier, gorier, and more suspenseful than ever!

I’ve been meaning to get to this one for a while.

I had a hankering for some undead horror lately, and I finally pulled The War of The Worlds, Plus Blood, Guts, and Zombies from my TBR “To Be Read” list. It’s a “blood enriched classic” in the same vein (pun intended) as the more well-known Pride and Prejudice and Zombies, which means a piece of classic literature is given over to a horror author to create a “mash-up” story by blending in horror elements. It’s a fun idea that yields mixed results.

Luckily, War is a winner. 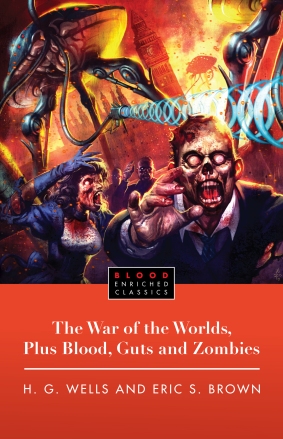 The first thing to know about this sub-genre is that you’re reading literature. These books are roughly 80% original material, so if you don’t like old time-y prose and dialogue, you’re best to skip it. Pride and Prejudice and Zombies, or PaPaZ, as some call it, wasn’t my cup of tea because I didn’t enjoy wading through Jane Austen’s story a second time just for a few scenes of ninjas fighting zombies. Luckily, I had a much better experience with the subject of this review.

War of The Worlds was excellent source material to create a zombie mash-up from. At it’s core, War was already science fiction about a supernatural invasion, so it was a great foundation to throw the undead onto. Eric S. Brown has written numerous satirical horror stories and books, and was a good choice for a co-author. He blends the ghoulish violence and gore into the original work so well, in both plot and prose, it feels like it was always there.

The premise is that a zombie outbreak ensues when the Martians unknowingly bring some outside entity (space bacteria?) with them during their invasion. The undead nightmare becomes an issue for human and Martian alike, and is well designed as an ever-present threat woven through the story. Brown is also adept at penning graphic violence, and his description of death and destruction really delivers on the Blood, and Guts part of the title.

I highly recommend War as an entry point into the “blood enriched classics” series, and for horror fans in general. It’s a cool spin on a classic story, and it reads quickly even weighing in at over 300 pages. If you or someone you know loves alien invasion stories, zombies, or both, put it on your list to read. (You can buy it on Amazon using the affiliate link below.)

The War of the Worlds, Plus Blood, Guts and Zombies

Damnificados is loosely based on the real-life occupation of a half-completed skyscraper in Caracas, Venezuela, the Tower of David. In this fictional version, 600 “damnificados”—vagabonds and misfits—take over an abandoned urban tower and set up a community complete with schools, stores, beauty salons, bakeries, and a rag-tag defensive militia. Their always heroic (and often hilarious) struggle for survival and dignity pits them against corrupt police, the brutal military, and the tyrannical “owners.” Taking place in an unnamed country at an unspecified time, the novel has elements of magical realism: avenging wolves, biblical floods, massacres involving multilingual ghosts, arrow showers falling to the tune of Beethoven’s Ninth, and a trash truck acting as a Trojan horse.

Steering away from my normal track of horror and dark fantasy, I recently read Damnificados by JJ Amaworo Wilson. Published back in 2016, this heavily fictionalized story based on true events delves deep into magical realism. It’s a mix of humor, human drama, and fantastical events that is entertaining if not flawed. 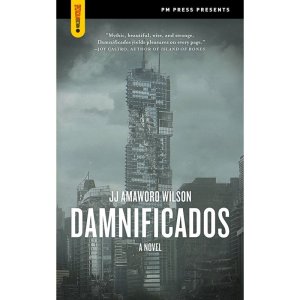 Damnificados essentially tells its readers a legend. The legendary tale of Nacho Morales and his struggle to keep together a community of people after they successfully take over an abandoned tower in the center of a city. The story is told in present tense which lends an urgency to the writing. Wilson’s prose is excellent, especially his detailed descriptions of locations and events. I found myself laughing and re-reading certain sections simply for the pure enjoyment of the printed words.

On the flip side, the book’s pacing is tough. For a novel clocking in at under 300 pages, some portions drag heavily. New characters are constantly introduced and there are a few world-building subplots that were unnecessary, if not entertaining. The overall plot was straight forward and could probably have been told as a novella, were it not for the elaborate descriptions and prosaic experimentation (one chapter features a 4-page long sentence). As the saying goes “middles are hard”, but I’m glad I put up through the minor slog to reach what was a satisfying ending.

As someone who has written satire, I appreciated Wilson’s often tongue-in-cheek tone and the positive message he portrays even in light of the struggles the characters face in his book.

If you’re at all interested in political fiction, magical realism, or stories told as legends, you may want to grab Damnificados and give it a read. You can purchase a copy from Amazon using my affiliate link, provided below.